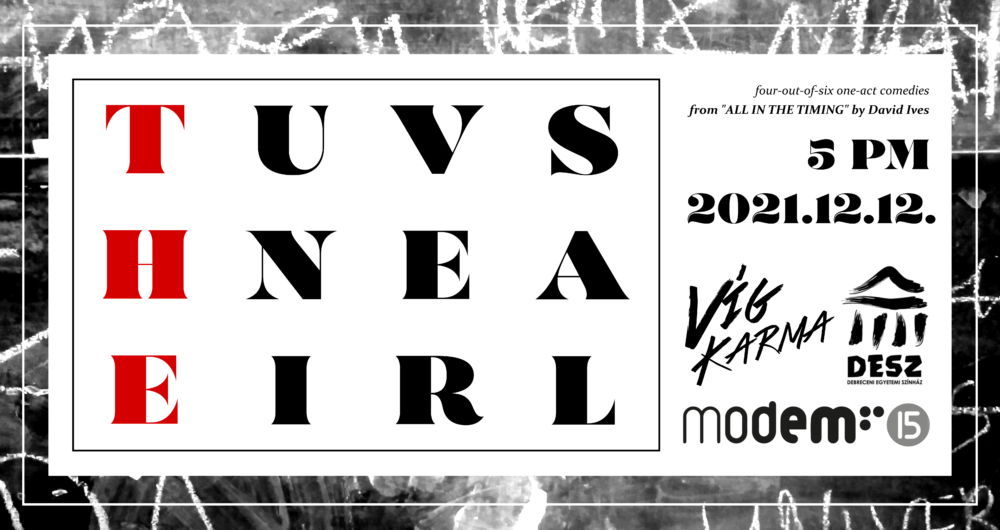 MODEM and DESZ-Vígkarma would like to invite everyone to a night of theater in English. In the play “The Universal,” we are presenting four of the six one-act comedy plays from “All In The Timing” by David Ives. The scenes are connected by the themes of language, communication, and human understanding (or lack of it), with existentialist perspectives of life and meaning (or lack of it).

David Ives (born July 11, 1950) is an American playwright, screenwriter, and novelist. He is perhaps best known for his comic one-act plays; The New York Times in 1997 referred to him as the”maestro of the short form.” Critic Vincent Canby wrote, “Ives [is] wizardly … magical and funny … a master of language. He uses words for their meanings, sounds and associations, spinning conceits of a sort I’ve not seen or heard before. He’s an original.”

The theatre company “Vígkarma” is one of the most recent independent theater “laboratories” of Debrecen, Hungary – it has been established in January 2014 by independent theater-makers, who had been working together for years by then, and rehearses and puts performances on stage under the auspices of the Theatre of the University of Debrecen (DESZ). We frequently participate at independent and university theatre festivals. Our play „Ubu FC – The Final Match” has received the István Paál Diploma at the FEST-Feszt, Budapest in November 2017, and received a Creative Prize for “the surprising and witty re-thinking of classic absurd” at the XXXVI. Imre Madách Literature and Theatre Festival at Balassagyarmat. It has also been performed at Joy Fest in Kiev in 2018 in English, and at the 2019 Mondial of the International Amateur Theatre Association in Saint John, New Brunswick, Canada.

The immunity certificate and face mask is obligatory.